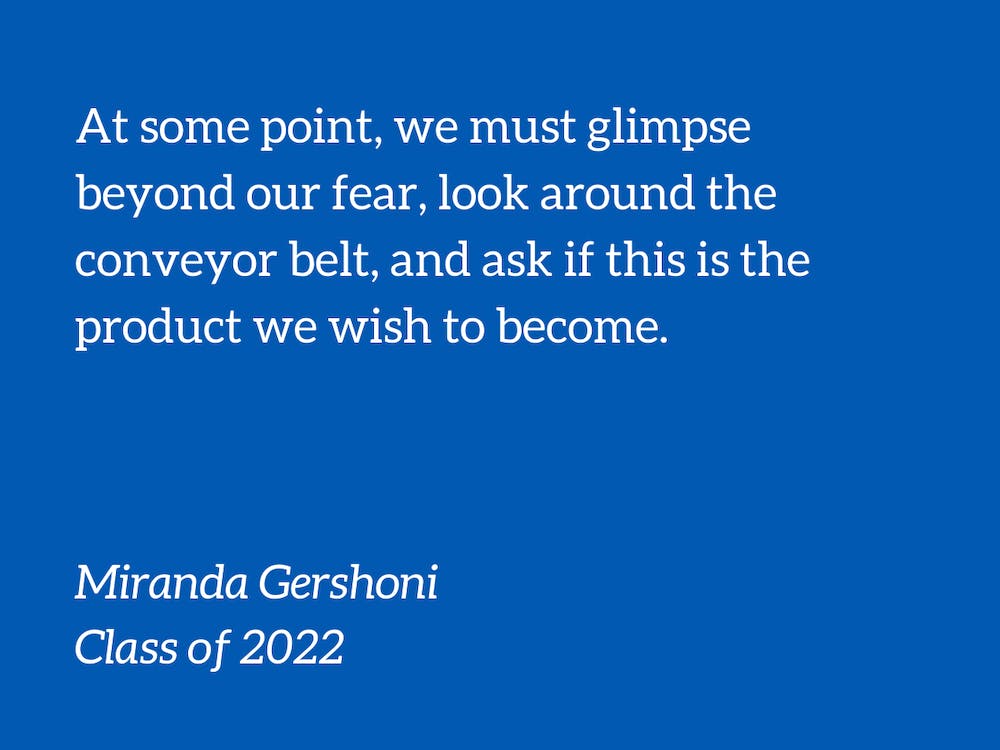 When I was in second grade, I went to see my teacher a few times a week with the bad news that I had hit my head. I started to feel guilty for lying after a while, so I would sometimes drop my pencil on the floor, squat under the table, and audibly hit my head on the way up. Hall pass in hand, I happily walked the familiar path to the nurse’s office. I lay down on the sticky vinyl mat and gazed at the fluorescent lights, my eyes rocked by the buzz of long fingernails on the big keys, clutching a Ziploc bag with the frozen paper towel that seemed to regenerate every week to a perfect rendering. until the end. In a world where the only certainty was lack of control, at age seven I found comfort in this airless closet-sized room. It was my only option for rest and solitude, a chance to shut down the engine I had been taught to run with precision every day in this blinding institution.

I think I’ve always felt a sordid air escaping the intricacies of daily announcements. Since primary school, a distrust of authority has risen to a latent contempt, not limited to the school but certainly fertilized by it. Prison norms shape us at a distinct cadence of being that barely resembles the human form. Thinking back to all those years sitting behind a desk, still and buzzing, I see how it gradually eroded me from the inside. I’m still here, but less. When I complained about going to school in the morning, it wasn’t out of a challenge, but because I so often felt like I was being hit in the head by the end of a rake just to do turn around and back up to the other end.

When they shelled out my high school diploma like catnip on my nose, they didn’t realize that graduating in the top five percent of my class meant reducing my average night’s sleep by 70 percent and that my perfect grades weren’t achieved out of pure admiration for the state of Texas essential knowledge and skills, but as a coping mechanism for PTSD. More equations solved, more words on a page, less room to think. I was supposed to slowly decompose under the fluorescent lights of this fiercely cold AP test room. I wonder at what point I reached a numbness capable of pulling my mannequin shell back into my body to face the collapse, to give in to the inertia that overflowed into the space between my inner lived reality and the theater. built that I had to not only participate faithfully but excel. If I could go back and get rid of the expectations hidden in the ‘gifted’ label slapped on my record in fourth grade, sacrificing the privileges she offered me in exchange for one more piece of my personality left untouched, I will do it .

The ridiculous efforts of young people and their parents to gain admission to the best schools are well documented. In his 2014 book, “Excellent Sheep: The Miseducation of the American Elite,” William Deresiewicz addresses the central problem that arises once these students are admitted. Academic perfection is no longer enough, today we are faced with a more elusive mandate: young people must present themselves as genius humanitarians who wake up every morning to save the world, one startup at a time. Rather than seizing the rare opportunity to challenge our belief systems and learn about other cultures, reflect and travel the world from a more intentional place, we jerk off to our own sparkling innovation. We are sweating through the mad rush that we are supposed to want to change. Of course, it can feel like there is no choice but to head to these capitalist torture chambers – we are being told all over the place that this is the only way out. living. But at some point we have to take a look beyond our fear, look around the treadmill and ask ourselves if this is the product we want to become.

The education system is not broken, it is functioning as it was designed. Thanks to Frederick Taylor and his Booming innovation in the management of workers like livestock, schools have followed suit in the name of efficiency. The consequences of education being inextricably linked with economics have been mentioned in so many ways that writing about it seems unnecessary. So rather than writing “about” it, here is my attempt to write about it. At some point, rather than keep pushing, analyzing, and proposing solutions, our body shuts down our mind, begging for recognition of the cost of impoundment. We owe it to ourselves to breathe and sit with it. With a new sense of embodied inner sovereignty, we can decide how best to move forward. This time in our skin, going back to what has always been, to what our bodies have always known.

It was the last year of high school and the promised rewards were golden in front of me. The praise I received, those strained smiles thrown back at me, felt the same as artificial icing in my guts. The sweetness stung. Lined up with the rest of the identical graduates in the stadium where they were herding sheep for the rodeo hours before, I sank into sweet glee. Wedged in starchy caps for this so-called mass reconnaissance operation, I couldn’t help but wonder who it was all for, what its culmination meant. I wanted to ask, Do you know why I did this, or how? Why do you care about the numbers I have accumulated at your facility? What does this mean to you? I wanted the announcer of my accolades to know that they were the inevitable byproducts of a strategic spiritual enlightenment on the infuriating K-12 assembly line.

Wanted someone to blame for all those times I was told to sit down and keep calm and stick to the prompt and never think about what you want but always aspire to the approval of vague and powerful entities. First they get us ready to be ‘middle school ready’, then they make sure we perform at the ‘high school level’, then the heartbreaking ‘college prep’, then off to the Career Center, where we are finally trained enough for a life of endless professional development. The strings of “college preparation” are transparent but cleverly disguised. The College Board gets its bounty by convincing us that only their tools can sharpen the brightest minds. Universities have their turn with us and keep their promise to spit out skilled workers. And we go out, stuffed to the brim with shiny prizes, our minds numb or dying.

By the end of my twelve-year term, I had been completely conditioned to be less human. In college, the same model simply changed. It was never really the details – my teachers were mostly caring and thoughtful, and for all its thorny delicacies, I wouldn’t trade my public school experience. The larger mechanism and culture that feeds it has been so ingrained that it infiltrates even the best of intentions. The ultimate order was so persistent: relentlessly succeed and say nothing. Leave the place as you found it. Less an order than a survival guide. Survive what, we were never told, just scared of the threat of looking and being bad. Train us in the holy paradox: let us produce you to make you feel as small as possible, then demand the greatest of you. Only after it’s been approved, of course.

The milk-mustache Disney stars plastered on cafeteria walls and the salaries of the highest paying professions each year will never leave my psyche. How come Got Milk is burnt in my brain when I never learned what a clitoris is or how to think on my own?

“Our public schools, which should encourage students to see beyond the demands of the moment, have instead yielded to the immediate demands of culture and the economy at large,” writes Diana Senechal in “Republic of Noise: The Loss of Solitude in Schools and Culture “. . ”

I felt the car door close over my curious limb before it had a chance to pierce the standardized tested material. You can pass a course without understanding 30% of the content. With access to any school’s labyrinthine social network and a smartphone, you can also get perfect grades and understand even less.

If I didn’t write tangled clauses, I would only be able to return pre-approved scintillating sentences from a nifty new algorithm. I took SSRIs until I noticed I couldn’t get to the depths of my poetry, until I realized that I would rather be a worker and feel less functional than having my neurons chemically aligned so I can be a coding girl while I suckle my third Soylent of the day. I would rather have my body healthy and my mind vibrant than being recognized by someone called “dean” to be on their “list”. I’d rather sit in a room with so many thirteen to twenty-two kids and figure out how we’re all going to look each other in the eye and let each other breathe and stop when we’re tired and say what’s real without letting go. Saran wraps just as we grew up telling ourselves not to.

Get The Chronicle delivered straight to your inbox

Subscribe to our weekly newsletter organized by an editorial. Cancel anytime.

Miranda Gershoni is a Trinity Elder.