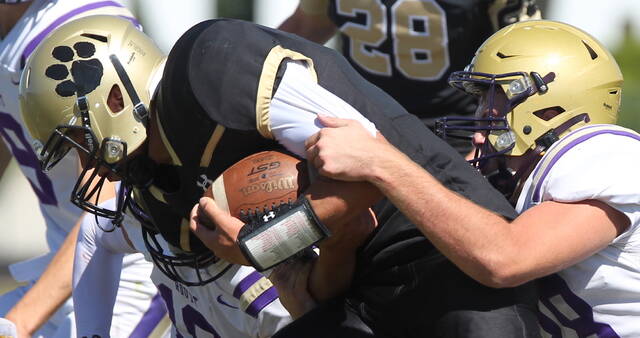 Soaring high after a win over Mendon Unity last week, the Routt football team hit a low on Saturday with a 48-6 loss at Camp Point Central.

Routt stopped the Panthers’ first practice at the 6-yard line. But Camp Point tackled a Routt running back in the end zone in the Rockets’ second scrimmage game for safety and a 2-0 lead. The Panthers covered 54 yards after the ensuing kick to make it 10-0 early in the second quarter.

Camp Point Central scored on their next three possessions to take a 34-0 second-half lead, helped by two Routt turnovers. The Panthers scored on their first possession of the second half to bring the score to 42-0 and start the clock with 11:26 left in the third quarter.

“We have to execute,” said Routt coach Barry Creviston. “And if you don’t come out with the right frame of mind…. We have prepared for everything they’ve done. Our scout team is leading what they are leading. You just don’t get that look at it. daily life of your scout team It’s a very good football team We have to take care of ourselves We have to dust ourselves off Reunion week Lots of distractions.

Routt scored his only touchdown on a six-yard Kohen Hoots rush at the end of the fourth quarter. Hoots was almost tackled and his mask caught on play, but he managed to break free and cross the goal line.

“I congratulate the guys who were there at the end,” Creviston said. “They were still fighting fiercely. We just… when things don’t go our way, it looks like they snowballed in a hurry.

It’s reunion week for Routt, who hosts Brown County next Saturday before wrapping up the season with games against Triopia, West Central and Greenfield-Northwestern.