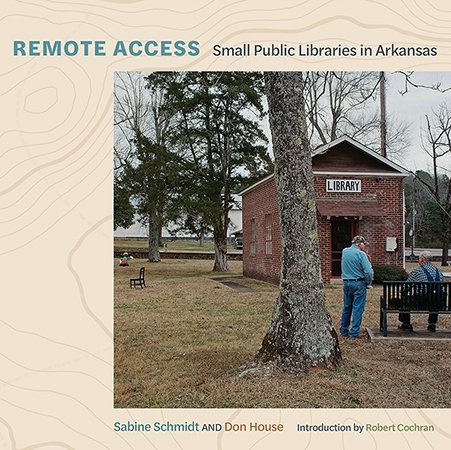 The cover of Remote Access: Small Public Libraries in Arkansas.

The U of A Press and the David and Barbara Pryor Center for Arkansas Oral and Visual History will present a book launch for Remote Access: Arkansas Small Public Libraries at 6 p.m. on November 18. Authors Don House and Sabine Schmidt will host a discussion at the Pryor Center about the book and sign copies afterwards.

For three years, photographers House and Schmidt toured the state, documenting libraries committed to serving Arkansas’ smallest communities. The result of their travels is Remote access.

Schmidt’s carefully constructed color images of libraries and their communities and House’s rich black-and-white portraits of library clients and staff join the authors’ personal essays on their experiences.

Arkansas history and culture is also an important part of the book, as the authors visited a section of the Trail of Tears near Parkin, the site of the tragic 1959 fire at the Arkansas Negro Boys Industrial School in Wrightsville. and Maya Angelou’s childhood home in Stamps. , among many other important destinations.

Remote access is part of the U of A Press The Arkansas Character series, edited by Robert Cochran. “Schmidt and House,” Cochran writes in the preface, “begin and end as fierce advocates of libraries and librarians like their human faces, impressed to the point of being in awe of their ingenuity… angry to the point of their fury. undervaluation or their mistreatment. “

A limited number of copies will be available for sale through local Pearl’s Books at launch. The book is expected to be on sale online and in retail bookstores by mid-December.

“A signed copy of this beautiful coffee table book,” said Charlie Shields, U of A press marketing director, “would make a great gift for anyone who loves and appreciates libraries, photography or rural Arkansas. “

The event is free and open to the public, and wearing a mask is compulsory. The Pryor Center is located at 1, rue Center Est in Fayetteville. Registration is not compulsory.