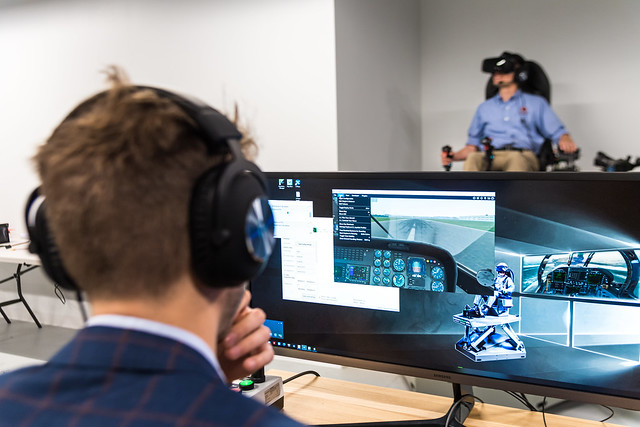 Body of the article

Auburn University is home to perhaps the world’s first set of motion-based virtual reality flight simulators to be used for research at an academic institution.

“To my knowledge, very few academic institutions have the capability of a single motion-based simulator that can be used for rotorcraft, general aviation and fighter jet simulations. At the same time, probably even fewer, if any, institutions have two,” said Saetti, a recent recipient of the Office of Naval Research’s Young Investigator Award, whose research focuses on modeling, simulation, order reduction and control of high order models of coupled flight dynamics, aerodynamics and aeroacoustics of biologically inspired aircraft, rotorcraft and flying vehicles.

“With two simulators, we can simulate multi-pilot and multi-aircraft scenarios, such as aerial refueling, or even air-to-air combat.”

The units, purchased from Brunner Elektronik, a leader in virtual reality flight simulation, allow Saetti and other aerospace engineering professors to take research further than before and future aerospace engineering students in classrooms in flight dynamics and rotorcraft control the opportunity to develop and test their own flight control systems. The simulators can be piloted using virtual reality goggles.

“The department is excited about the unique and innovative flight simulators that are at the heart of Dr. Saetti’s Extended Reality Flight Simulation and Control Laboratory,” said Brian Thurow, Department Head of Aerospace Engineering. “Dr. Saetti fully embraces technological advances and tools whose capability, relevance and impact will only grow in the coming decades.

“I am thrilled to see Dr. Saetti and Auburn University playing a leading role in adapting and using these unique tools to advance the state of the art in modeling and simulation, flight dynamics and control. I also expect these simulators to have a significant impact on education, as our students will be able to work and learn in environments that previously would only have been accessible through simulators. much more expensive and cumbersome full-motion flight models that are usually beyond the capacity of an academic institution to design and manage.

Not only did Saetti acquire the VR simulators, but they are complemented by haptic feedback suits (TESLASUITs), which will be used to provide pilots with important information, including the location of peer aircraft, landing zone locations and the noise of the rotorcraft, by feeling on the body.

“The suits have an array of electro-muscular stimulation channels,” Saetti said. “We can use them in many ways. Some of the applications that we are considering, for example, are to signal the noise produced by the aircraft on the pilot’s body so that the pilot is aware and reduces the noise on a certain area of ​​the ground. Another use is to signal a sensation on the body when the aircraft is being chased so that the pilot knows the relative position, speed, and acceleration of the other aircraft. This does not increase the pilot’s workload, and he can keep his eyes on the gauges or the sky, using the stimulation on the body to locate or escape other aircraft. It’s about distorting information through another sensory channel, which is haptics rather than vision.

Saetti added that the suits and simulators will be used to study flight control systems in helicopters when landing on ships, referring to his current award-winning study, “Linearization of High-Fidelity Aeromechanics for extended reality simulation and the control of on-board interactions”.