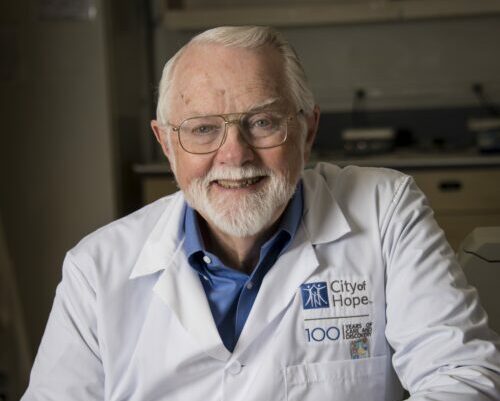 Arthur Riggs, a world-renowned diabetes expert who developed the technology that led to the first synthetic human insulin and who became a major donor to Duarte-based City of Hope, died March 23 at age 82 after having battled cancer, the nonprofit announced.

Last year, he publicly donated $100 million to City of Hope, when the diabetes research center was renamed in his honor. This followed years of quiet behind-the-scenes donations that totaled $210 million, bringing his total donations to $310 million. He was by far the most prodigious donor in the 109 year history of City of Hope.

Riggs’ breakthrough scientific discoveries were made over more than half a century of research, paving the way for the development of the monoclonal antibody therapies that underpin modern treatments for cancer, autoimmune diseases, blindness and a host of other diseases. His groundbreaking work on diabetes enabled the massive production of insulin for people living with the disease. Today, synthetic insulin is used by hundreds of millions of people.

Riggs was already recognized for his new research into the inner workings of DNA when he joined City of Hope as a research scientist in 1969. In 1977, his research led to the creation of the first artificially synthesized human gene and protein , the important hormonal inhibitor. somatostatin, followed soon after by the very first synthesis of human growth hormone. A year later, he was able to apply this technology to produce human insulin from bacteria.

As a scientist and leader at City of Hope over the next 53 years, Riggs continued to perform groundbreaking research and make major contributions in the life sciences. His 1975 paper on mammalian epigenetics—how behaviors and environment can cause changes that affect how genes work—remains one of the most frequently cited on the subject.

During his long career as a researcher, he is the author of more than 200 scientific articles and has filed 20 patents. He was recognized for this lifetime of achievement by his election to the National Academy of Sciences in 2006.

“Arthur Riggs was one of the scientific giants of the day and should be a household name for his contributions to diabetes alone,” said Robert Stone, chief executive of City of Hope, when Riggs’ death was announced. “His research also led to the development of monoclonal antibody therapies that today treat cancer and other diseases.”
Riggs continued his search efforts at City of Hope until just months before his death.

“I could have retired to a South Pacific mansion and had fun on the beach, but I would have been bored in a week,” he said in the Business Journal interview. “I will continue as long as possible. There is such a need for diabetes research and treatment; diabetes is an epidemic, and it is becoming a huge problem for global health.