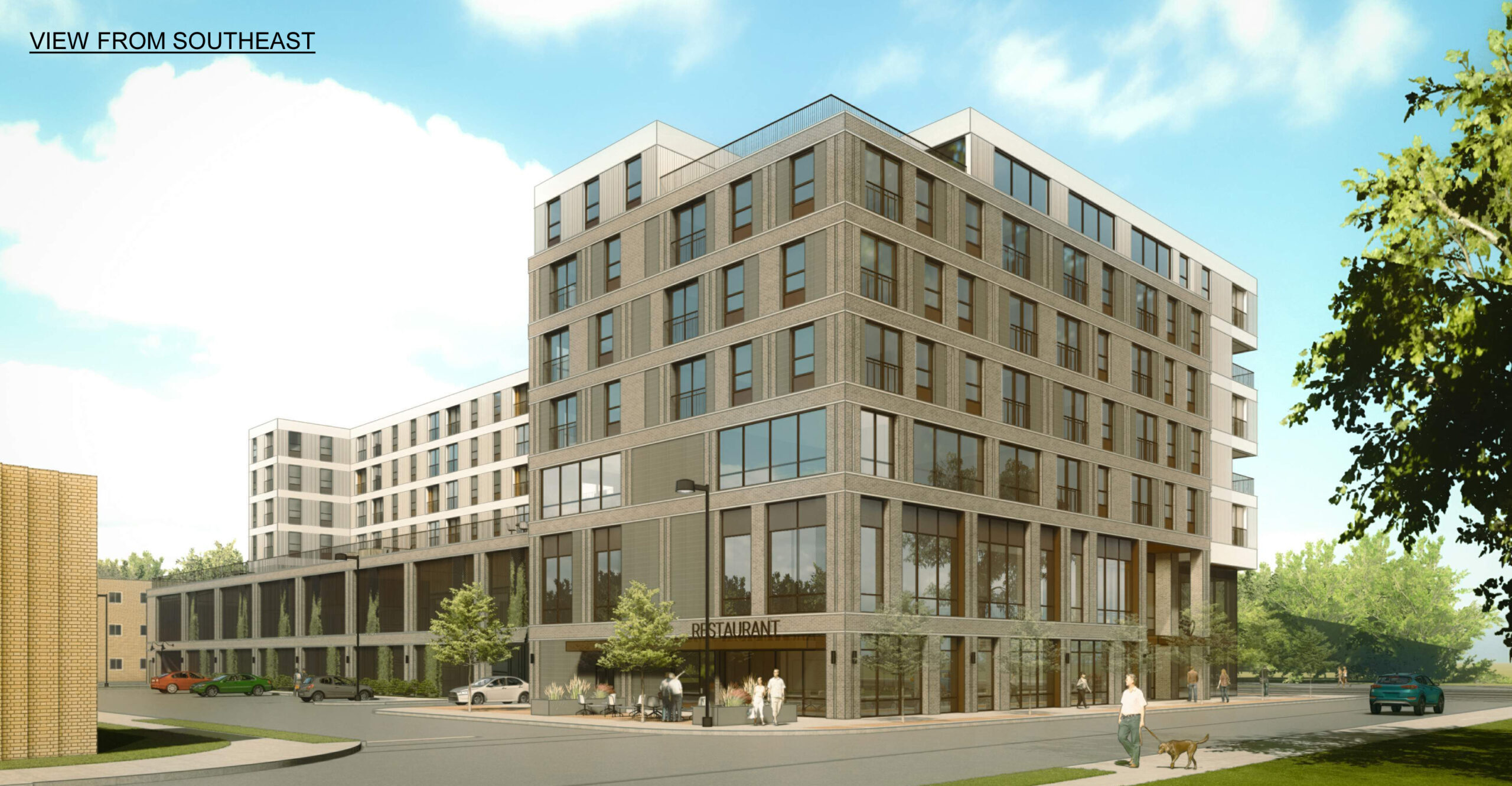 View from the same location in Webford and Graceland of the artist’s rendering of the proposed mixed-use building for the Journal & Topics property.

The home of the Journal & Topics Media Group and before that the post office in downtown Des Plaines will become the site of a $35 million development consisting of 131 apartments, a restaurant and a lounge, according to a proposal submitted to the city last week.

Compasspoint Development, LLC, which is currently developing a property on Graceland Avenue from the Journal & Topics, is seeking zoning permission from the city to proceed with the seven-story project. If the city approves, groundbreaking could take place in the spring of 2023 with occupancy in the fall of 2024. Compasspoint would purchase the newspaper property along with a city parking lot adjacent to it.

Des Plaines Mayor Andrew Goczkowski, who lives near the site on the northwest corner of Graceland and Webford Avenue, called the proposal a “grand plan” that will end downtown redevelopment and serve as a link with the Compasspoint project across the street.

Currently on the property is the familiar brown-brick Journal & Topics building that faces Graceland next to the Metra train tracks. To the west is a small brick building which for the past 35 years has served as the press and distribution center for the newspaper company. A municipal car park next door will also be part of the development. The Dance Building to the west will not be part of the plan.

If the project goes ahead, the Journal & Topics will likely move to a highly visible site in downtown Des Plaines. Last October, the Journal & Topics outsourced the printing of its 13 suburban community newspapers to a commercial printer after performing the task inside the Webford building since 1988. This meant there was no need for the company to use the building where it housed its large press. Additionally, technological changes in the publishing industry over the past 20 years have resulted in the need for much smaller office space where computers and digital equipment can be housed rather than old metal machinery. which were labor intensive. 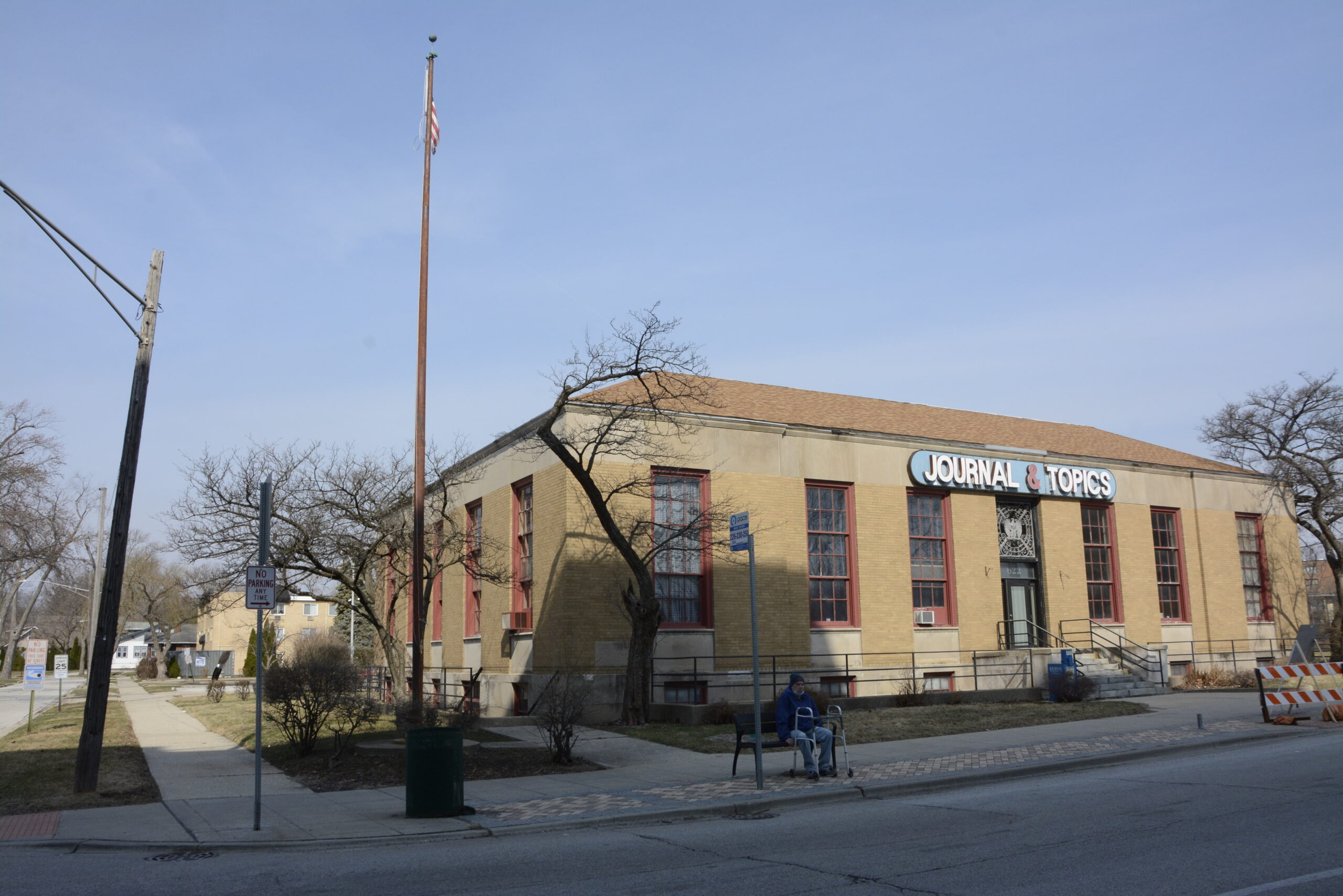 The Journal was founded in the early 1930s in the depths of the Great Depression. The Des Plaines Journal was the only publication the society published at the time. His first office was located on Ellinwood Street where the Sims Bowl stood before it was demolished. Over the next eight decades, the Journal & Topics grew into a series of newspapers that also publish special sections, magazines and their journal-topics.com local news site. The company’s founder was William Fabian, a local printer. He sold the operation to Richard and Mary Jane Wessell in 1946 after Mr. Wessell’s two years of service in the United States Navy. He participated in the Pacific Island battles at Iwo Jima and Okinawa, both of which were among the costliest battles of the war in terms of casualties and deaths. Around the year 2000, brothers Todd, Rick and Bob Wessell took over ownership and operation after the death of their parents.

According to Joe Taylor, director of Compasspoint Development, the proposed office building will be seven stories high, the same height as the 212-unit apartment building under construction at Graceland. It will face Graceland where there will be a lobby, restaurant, lounge, small cafe and mezzanine. Above, the apartments will be located and distributed to the south along the railway lines to the west. A two-level parking garage will be constructed west of the restaurant along a section of Webford. A total of 195 spaces will be provided, most of which will be inside the garage. Exiting and entering the parking garage will be out of Webford west of Graceland. A fitness center will be located on the second floor of the building and an outdoor pool and dog run with grooming salon on the third floor.

“The redevelopment will significantly improve the current site conditions,” Taylor said in his report to the city.

Other aspects of the building call for its design to consist of a white, gray and wood exterior and the addition of ivy landscaping to the south exterior parking wall facing Webford to partially obscure the parking structure . Extensive street developments of the entire area are also planned.

Compasspoint’s current project through Graceland is expected to be completed in October. Apart from the apartments, the development also includes retail outlets on the ground floor and one or two restaurants. Its total cost is about 70 million dollars.

The current Journal & Topics office building was built in 1940 to serve as the community post office. In 1970, the post office moved to newly built quarters on Oakton Street and put its downtown building up for sale. A Seattle-based company named Norfin International, which made paper collating equipment, bought the property with the intention of turning it into its Midwest office. This never happened, and the three-level building sat vacant for 12 years. In 1987, the Wessell family bought the property. The brick building just to the west was built by the Wessells in 1952, where all of its operations were housed. Twenty-five years later, after years of unprecedented growth, the family purchased the one-story office building at 1375 Oakton St. that housed Burchard Cleaners.

“I think we need to make the most of this opportunity for growth in this area,” Mayor Goczkowski said. “We will work with neighbors to address their concerns. I am excited and look forward to the discussion.

A meeting of the Des Plaines Planning and Zoning Council will be held on Tuesday, April 12 at 7:00 p.m. at City Hall where the proposal will be reviewed and discussed. The public is invited to attend. 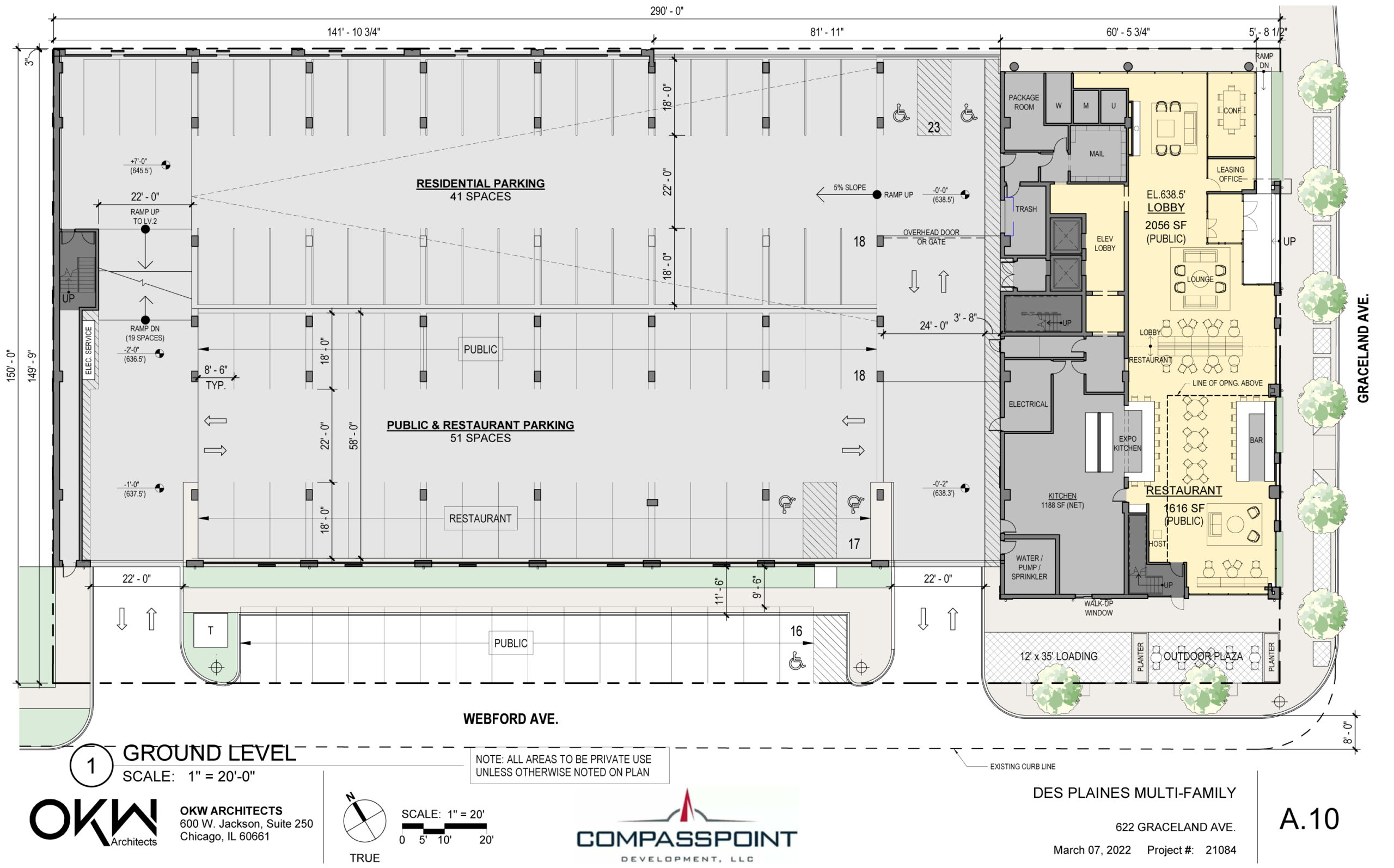 The site map of the proposed development on the Journal & Topics property shows the parking lot development with access from Webford Avenue.

Support local news by subscribing to Journal & Topics in print or online.