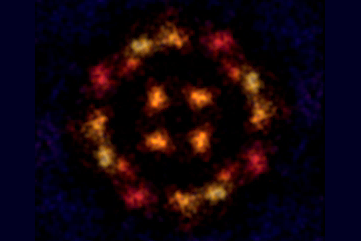 A new computational technique allows researchers to see clearer images of biomolecules by exceeding the usual resolution limits of the atomic force microscope (AFM). The method offers a new way to obtain high quality structural data on biological compounds such as proteins in their native environment.

While x-ray crystallography and electron cryomicroscopy allow researchers to image biomolecules at the atomic level, these techniques rely on samples that have been crystallized or frozen at ultra-cold temperatures, which can alter the natural forms of the cells. molecules. AFM allows molecules to be probed under more normal physiological conditions, but the images are not as sharp as with other methods.

Today, a team led by Simon Schuering from Cornell University, USA, found a way to improve the quality of AFM images. The strategy, which draws on methods already used in light microscopy, uses a localization image reconstruction algorithm to process data from multiple scans of single molecules. It can even be used retroactively to reveal new details hidden in old AFM data.

Demonstrating the technique, the researchers explain that they could “increase resolution beyond the limits set by the radius of the tip and resolve single amino acid residues on soft protein surfaces under native and dynamic conditions.”

Highlighting another advantage of the technique, Scheuring told the Weill Cornell Medicince website that using highly resolved AFM to monitor single molecules as they move between confirmations could help ” avoid potentially misleading results that can occur when averaging data from many molecules ”.