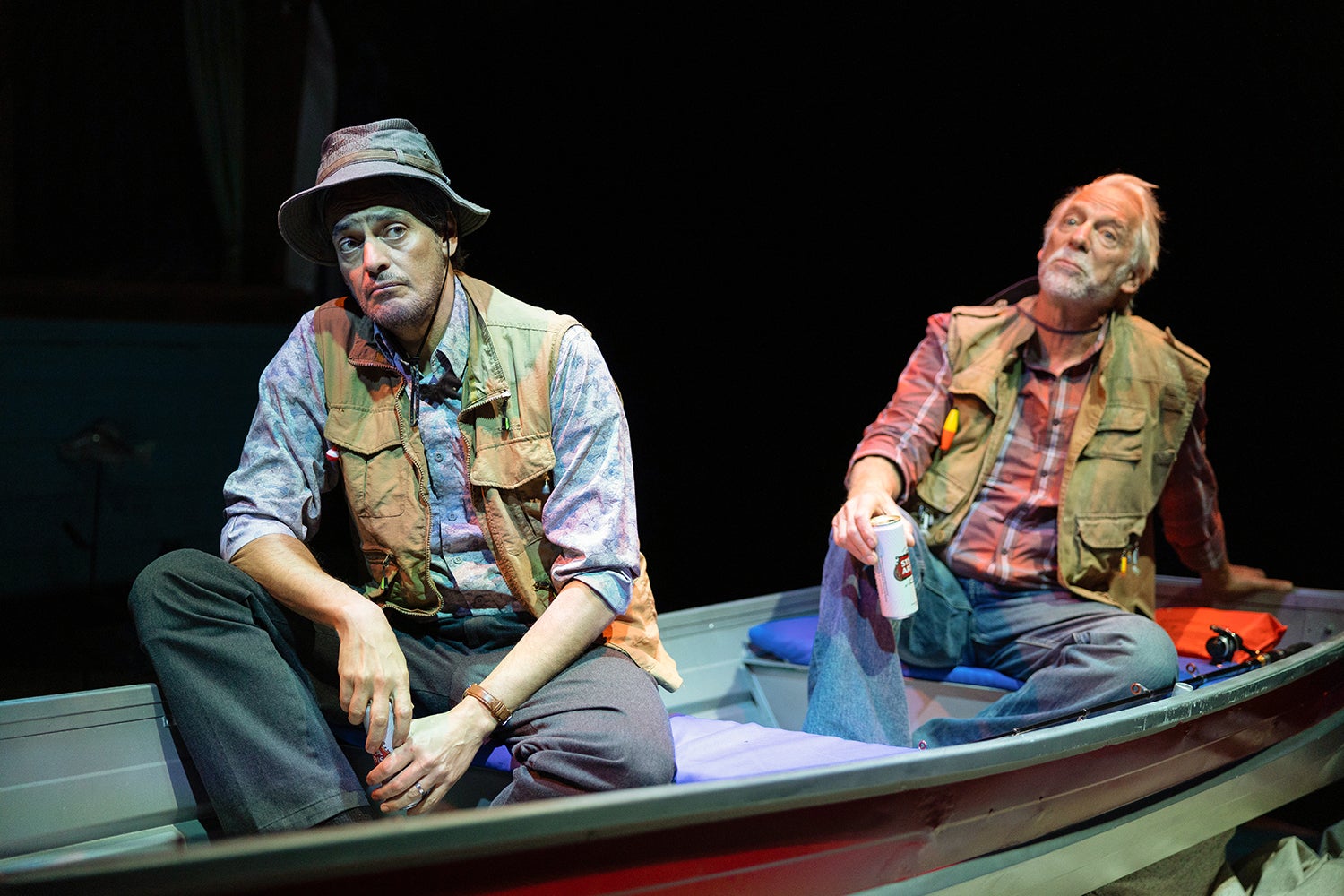 Two years ago Assistant Professor Samer Al-Saber and Arab-American playwright Betty Shamieh sat down to figure out how they could work together in class, on the page and on stage. This encounter led to classroom collaborations at Stanford, the development of a new play during Shamieh’s Denning guest artist residency in 2021, an online reading of the play with TheatreWorks of Silicon Valley, an edited anthology of Shamieh’s plays and, finally, the play’s in-person premiere, As soon as impossible, with a cast and crew of students and faculty this month at the Harry J. Elam, Jr. Theater.

Al-Saber, who teaches in the Department of Theater and Theater Studies (TAPS) of the Faculty of Arts and Humanities and directs As soon as impossible, said of the initial encounter and subsequent collaborations: “It is unusual for artist-to-artist encounters to be so rich and productive. Upon reflection, I know that our common condition of being Arab formed the foundation for this creative connection. In addition to teaching and leading with TAPS, Samer is a faculty member at the Center for the Comparative Study of Race and Ethnicity (CCSRE) and the Abbasi Islamic Studies Program where he teaches courses on identity, race and ethnicity at the crossroads of Islam and the arts. He joined Stanford as part of the Faculty Development Initiative in 2018.

As soon as impossible is a comedy that explores the relationship between two older men, an Iraqi-American and a white Protestant Anglo-Saxon, whose annual summer fishing trip is interrupted by the unexpected appearance of Ramsey’s granddaughter, Layla. The play is ultimately about wartime friendship.

“I am known for writing hard-hitting dramas about the experiences of Palestinian and Arab-American women,” Shamieh said. “I believe As soon as impossible is perhaps my most powerful piece as it deals with issues of race and gender dynamics that are my obsessions, with a light touch. “

Tso says of his experience: “I cannot express enough appreciation to playwright Betty Shamieh for bringing us this play; working alongside the playwright herself, hearing her ideas and inspirations, was both intimidating and fascinating.

In the fall term of 2020, with extended restrictions on campus activities due to the pandemic, the office of the vice president of the arts at Stanford announced an accelerated series of grants available to Stanford staff and faculty. in any department or university program to support virtual guest artists for the winter and spring terms 2021. With the support of the Center for Comparative Race and Ethnicity and the Abbasi Program of Islamic Studies , TAPS has been chosen to virtually host Shamieh during the spring quarter of 2021.

The playwright’s engagement plan included a long-running new play development workshop where students, faculty, and staff would create a virtual lab environment to test various scenes and the play’s overall structure and provide insights. real-time feedback. Rather than performing the piece virtually at the end of the spring term, Shamieh was asked to extend her engagement as a guest artist and perform a live version of the piece this fall term.

“I am grateful that I was able to develop this piece as Denning’s guest artist with the incredible director, Samer Al-Saber, whose incisive insights into the text have strengthened it considerably,” Shamieh said. “A big thank you to the TheatreWorks Silicon Valley team for presenting a reading of this project in their New Works Festival Online, which allowed us to continue our work together and connect with audiences despite the pandemic. I’m so happy to have crossed paths with the talented students, design team, cast and crew at Stanford who so happily worked together to bring this story to life.

In his director’s note for the play, Al-Saber instructs audiences on how they can bring the story to life on their own. He writes, “Take a look at the scene: two trailers. Look at the list of actors / characters: four characters. A story is about to unfold here at Harry J. Elam, Jr. Theater’s Lake Berryessa. When the lights go out you will hear a grandfather tell his grandson to ask permission before hanging lights, then another grandfather will ask his granddaughter why she is there. They will cook fish and eat beans, and then other things will happen. All along, your generous spirit will lead you beyond any discomfort or stereotypical response. Instead, you’ll find that misunderstandings can make us better, laughter teaches us about ourselves and others, and from generation to generation a birthday is an anniversary.

Opening night is sold out, but tickets are available here for the remaining five performances on November 12-13 and 18-20.

This piece was originally commissioned by Second Stage with support from the Time Warner Commissioning Program. This production was made possible in part by the Stanford Visiting Artist Fund in honor of Roberta Bowman Denning (Office of the Vice President for the Arts), the Sohaib and Sara Abbasi Program in Islamic Studies, the Pigott Fund for Drama, the May Ellen Ritter Production Fund, and Drs. Ben and A. Jess Shenson fonds.